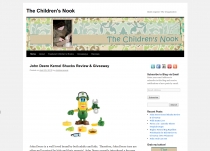 British Soccer Camp: A Brilliant Way to Develop Life and Game Skills as well as Love of the Sport

British Soccer Camp is the most popular camp in North America.  With an innovative curriculum that develops skills, speed and confidence in players ages 3-18, British Soccer Camps provide boys and girls with the rare opportunity to receive high-level soccer coaching from a team of international expert’s right in the heart of their own community. In addition to teaching new skills and improving game performance, each British Soccer Camp provides lessons in character development, cultural education and is the most fun your child can have learning the sport they love!

My son recently had his first experience with British Soccer Camps.  He has never played in a soccer league before and has had little experience with the sport before participating in this camp.  We have soccer nets at home and he has always loved to kick a soccer ball around so this camp seemed like the perfect way to truly introduce him to the sport.  My son participated in the half day British Soccer Camp last week at a local park.  I was very happy to see how much my 8 year old learned while also having tons of fun.  Most of the kids attending the camp play in soccer leagues but the camp does a great job of working of challenging kids of all different experience levels.  The coaches had the kids engaging in fun games, skill development, and competitive games throughout the camp.  Each day the camp would start with all of the camp members engaging in a skill based game.  Once the game was completed the kids would join their coaches and teammates that were all determined on the first day of camp.  Each child received a soccer ball and was encouraged to decorate it.  My son was on team Panama so he drew the country’s flag on his ball as well as the national animal.  He was super excited to earn his team a large chunk of points for his efforts.  Each team also earned points throughout the week for wearing their country’s colors and learning fun facts about their team’s country.  These activities helped the kids unite as a team as well as learn more about other countries!

The week of my son’s British Soccer Camp the weather was in the 90’s with very high humidity.  The camp coaches did a great job of taking frequent breaks so the kids remained hydrated.  My son ended each day of camp hot, sweaty, and smiling from ear to ear.  He loved competing and was always excited to show me new skills he learned each day.  I think its safe to say he had a great experience at British Soccer Camp.

Enroll in British Soccer Camps Today! Most camps will include a free ball, t-shirt, and certificate!  Fall soccer leagues will be here before we know it, so the end of summer is a great time for kids to learn new skills or simply get in this camp.

All camp information was provided by Challenger Camps.  I will be provided a complementary week of camp in exchange for an honest review of the camp experience.  All opinions are mine alone.

Leave a Comment
submit a review Join our blog team

Proud Member of The US Family Guide Network